Education Today- Thinking Inside the Box

Now, I know I initially created this blog to mainly focus on music, however I recently saw a photo on Twitter that was too thought-provoking not to write about. (See below) 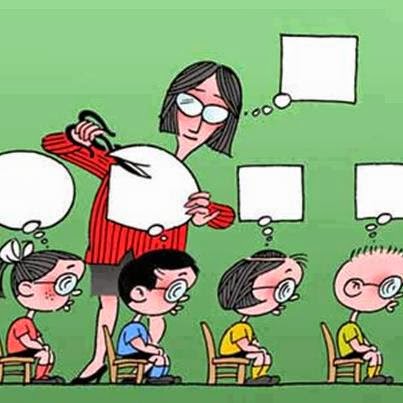 Today in the UK, children aged 5-18 will be spoon fed bundles of specifications, text books, and requirements, of which I perceive to be the main problem with the education system today. There seems to be more of an emphasis on learning, rather than on thinking itself, potentially leading to problems in our youth's future once they have left school. There is no preparation for the real world, just mere preparation for end of year exams and how to pass them. For example, my AS-Level Psychology exam last week. To pass, essentially all that was required of students was to learn various psychologists and dates, bodily reactions, etc. and apply them where appropriate, all of which I remember none of now. So ultimately, the purported way to get through school is by pointlessly regurgitating all taught information onto a blank piece of paper in a two-hour time frame, forgetting all of it a week later. Our entire perception of success is currently based on a letter grading system..

What has happened to creativity? Perseverance? Team-building? Even initiative? In reference to the title, maybe if our generation learn to think outside the box, we may have hope for a brighter, independent, and stable future. The exam grades attained by students do not necessarily define their ability as a person, nor who they are as a person.

The sooner exam boards, schools, and workplaces realise this, the better.

Everybody is a genius. But if you judge a fish by it's ability to climb a tree, it will live its whole life believing it is stupid.

A slightly more risky and controversial post from myself, if you have anything to add or argue don't hesitate to comment below. Thank yaaaa :)