Why 'Gay' Should Be Banned

Okay, now that I have your attention, I'd like to touch on something that has increasingly been brought to my attention and irritated me recently; gay. No, not the sexual orientation, but the word. It seems to me that 'gay' is now, and has been for a while, a widely used and accepted adjective to describe something negative. Peers, colleagues, siblings, pretty much everyone I know uses it, and its derogatory use has been grinding my gears more and more recently. An example: 'I can't believe my bus is 20 minutes late, that's so gay'. IS IT? IS IT REALLY 'GAY'? Your bus would only be gay if it was being driven by Elton John and Boy George on a glittery rainbow accompanied by a heard of unicorns while 'It's Raining Men' by The Weather Girls blared over loud speaker. If that was the case, then yes. Your bus is gay. The funniest thing is, people are using 'gay' in a negative way, when it's literal meaning is completely opposite. Although not used much anymore, the actual definition of gay is light-hearted and carefree. So why is it now used as an insult? Being gay is not a flippin' scandal, it's not a taboo. Perhaps if people stopped using it in a derogatory manner, more people would realise this.

However, it's not only used to describe something negative. It's also used widely in association of feelings and emotions. The amount of times I've heard someone describe someone else's emotions as 'gay', or called them a 'faggot' for being what they perceive as over emotional, is ridiculous. By saying this, you are not only putting gay in a negative light, but also suggesting that all gays are always over emotional. Although I am not gay myself, I know this is definitely not true.

We are all capable of wonderful things, so stop being so f*cking dense and widen your vocabulary! If you're too lazy to do so, I've provided you with some alternatives listed below:

When something has annoyed you: annoying, irritating, lame, infuriating, inconvenient, awkward, difficult, uncomfortable, unpleasant or, if you wish to stay colloquial, long. F*ck it, say long ting for all I care. Because the situation may be long ting, but it most probably won't be gay.

When referring to emotions: cringe, drip, wet flannel, useless, pathetic, annoying (in no way am I suggesting that having feelings is any of these, I'm just listing alternatives for those who may).

I'm also going to help you all out further by supplying you with a helpful diagram below of when it's acceptable to use the word gay. Enjoy :) 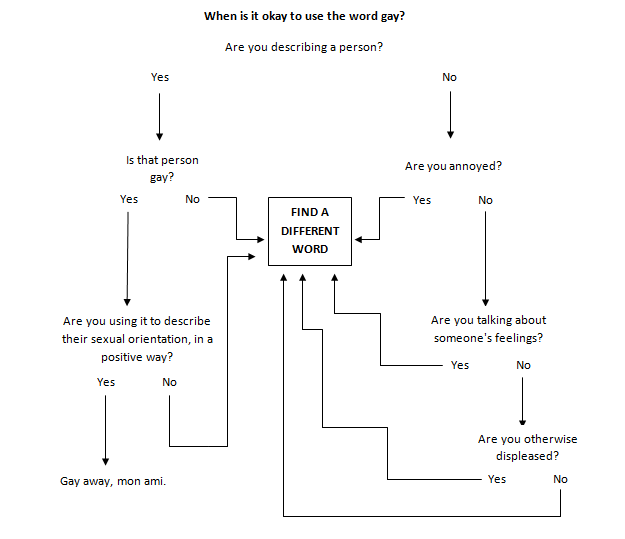